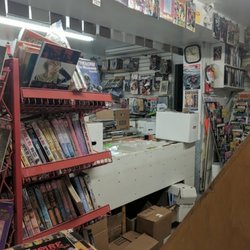 From larger than life heros that practically leap off the page, to science experiments gone wrong in the dead of night, comic books as a genre have come a long way to grow and evolve with the times. Image Collections, located just next to Robinson’s IDA Pharmacy, was started by a Streetsville local Todd Mara, who wanted to showcase the beautiful medium of comic books. Reading books, collecting cards and playing games are activities that people of all ages can enjoy and participate in together. People young and old are able to resonate with personable characters and secretly root for the underdog, and this is a concept Todd felt was under appreciated. But with great power comes great responsibility, and 30 years ago Image Collections decided they were ready and able to bear that responsibility.

When it came to choosing a location there was no option other than Streetsville in their minds, as the area is rich with memories for the entire Mara family. Todd’s dad Peter, owned another small business in Streetsville prior and the whole family has lived within the Streetsville area for most of their lives. The Village has the perfect blend of historical influence and community engagement that they wanted for their store. As well as the family-friendly orientation that our Village has, works extremely well in establishing the kind of environment they want to invoke within Image Collections. With the abundance of schools and community based groups nearby, there was definitely a wide range of potential customers.

In regards to a medium that has historically only ever been available in print, it begs the question, how has the rising use of technology affected how Image Collections does business? Instead of shying away from the use of technology and the popularization of superheroes in the media, Todd sees this as a way to educate the masses on the wide range of topics that are covered within comic books. In fact, some of your favourite TV shows such as Riverdale,The Walking Dead and Umbrella Academy were based on comic books that date all the way back to 1941! Of course, we can’t forget about all of the Avenger and Marvel Universe movies that have been gracing the silver screen as of late. But it’s the mainstream media that allows comics to become more widely accepted. Todd says these movies bring attention to the original comics because when people are looking at movie reviews, they are able to click right through to the comic and download it there. The online sphere has been critical in improving the way this medium is distributed, thus making it more easily accessible for people all over the world.

And of course we couldn’t leave Image Collections without asking Todd one last, very crucial question, Marvel or DC? But, when you are as invested into the comic world as many patrons of this store are, this is like asking a parent to pick a favourite child. A great writer can make you care about anything and the beauty of the comic book genre is that the medium is the message, and the main message is that anything can be told within the boundaries of a few pages and words. Both companies have had their ups and downs, what with Marvel bringing so much to the genre with their realistic and relatable characters. And DC inspiring thousands of imaginations due to the magnitude of their characters, it really is a tough call. Some of the greatest stories have been told from both sides and this will always be a topic that is debated, but Todd says if he had to live with just one, it would have to be Marvel.

To end with a quote from Ms. Marvel herself, “being the best you can be, that’s doable. That’s possible for anybody if they put their minds to it.” – Captain Marvel (Carol Danvers) Ms.Marvel Vol.2 #50

Todd’s passion for comic books is unmatched and you really should head over to Image Collections to experience it for yourself. If you’re looking to dive into the world of comic books or expand your collection then Image Collections at 181a Queen Street South is the place to be! You’d be amazed at what you can discover and you never know, maybe one day Image Collections might be stocking a comic book you wrote on their shelves.